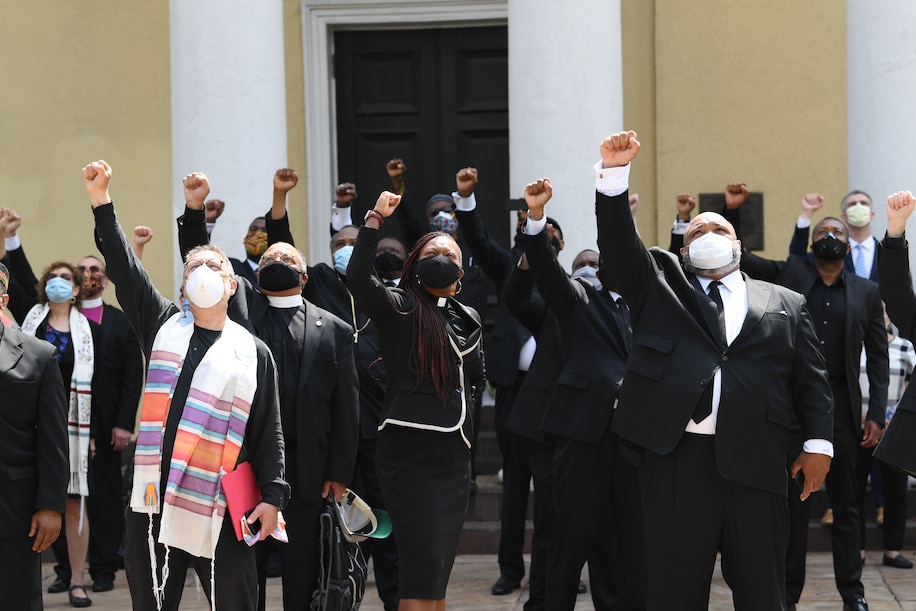 Around the world, many people have been demonstrating and making statements in response to the killing of of George Floyd. The picture above, taken from the Washington Post*, shows local faith leaders outside St. John’s Episcopal (Anglican) Church near Black Lives Matter Plaza in Washington DC. As members of our local interfaith forum, UAL Chaplaincy is allied with Faiths Forums for London, who have issued the following statement:

As faith leaders and activists from all over the UK, we write in solidarity with the black communities in the USA and the UK.

We have been horrified by the killing of George Floyd in the USA, and the brutality against the black communities there. Whilst these events have taken place thousands of miles away, we cannot ignore them, and must remain vigilant with regards to the situation in the UK.

We believe that voices from the black communities should be at the fore now, but as many of our own communities are comprised of people from different races and ethnicities, we wanted to make a statement of support. We stand alongside the black communities of the UK, of all faiths and none. Whilst Britain is overall a tolerant country, we recognise the history of systemic racism and prejudice many have faced, and reject the pernicious ideology of white supremacy.

As in the USA, COVID-19 has shone a spotlight on longstanding racial inequalities in this country. The report published by Public Health England this week shows that people from black and Asian ethnic groups are up to twice as likely to die from COVID-19 than those from white British backgrounds. This is deeply troubling, and there is concern that the crisis will have further disproportionate impacts on the BAME community in other ways.

We stand shoulder to shoulder with the black population of the UK, and the USA, in affirming that Black Lives Matter. Support for social change from different faith communities has been a source of strength in the past. The civil rights movement in the USA in the 1960s was backed by many faith communities. Rev Martin Luther King was president of the Southern Christian Leadership Conference and received support from different Churches. Furthermore, one of King’s most vociferous allies was Rabbi Abraham Joshua Heschel, who famously said after marching with him at Selma in 1965: “I felt my legs were praying.”

As well as expressing solidarity with the black population of the UK and USA, we recommit to standing up to racism and prejudice within our own communities, and wider British society.

* The photograph above accompanies the following article by Jennifer Rubin:

We have become so accustomed to President Trump’s debasement of religious faith and to his cavalcade of phony evangelical leaders who have elevated him to cult leader (and abandoned any hint of Christian values) that many of us were surprised this past week when we saw a magnificent display of actual religious faith and principle from diverse figures.

The Rev. Mariann Budde, the Episcopal bishop of Washington, kicked things off with a denunciation of Trump’s use of violence against protesters and misappropriation of St. John’s Episcopal Church and the Bible for a cheap political stunt. During an interview on PBS Newshour, she explained her reaction. “I felt it was urgent to remove that association as quickly as possible and to state our position in faithfulness to the Gospel as we understand it,” Budde said. She clarified that while Trump was always welcome to come to pray, “But that’s not what he did. That’s not what he did. . . . He is always welcome to be part of the worshiping body, but not to use the mantle of the church to his political — to communicate a political message.” Well, that was a refreshing reminder.

Budde’s denunciation of Trump’s conduct and use of violence was followed by Wilton Gregory, the Catholic archbishop of Washington: “I find it baffling and reprehensible that any Catholic facility would allow itself to be so egregiously misused and manipulated in a fashion that violates our religious principles, which call us to defend the rights of all people, even those with whom we might disagree.” Soon leaders of all faiths chimed in.

One interfaith group after another denounced the president. Rabbi Jack Moline, president of Interfaith Alliance, said in a statement that standing in front of a church with a Bible “right after using military force to clear peaceful protesters out of the area — is one of the most flagrant misuses of religion I have ever seen. This only underscores the president’s complete lack of compassion for Black Americans and the lethal consequences of racism.” Even some evangelical leaders split with Trump to criticize his actions.

People of actual faith underscored that a photo op enabled by unjustified violence is nothing short of blasphemous. Faith requires that we treat our fellow men and women with empathy, kindness, respect and generosity. Faith instructs us to eschew prejudice, misuse of power and “domination” of the weak and the poor. We saw genuine expressions of faith in an outpouring of interdenominational unity and love.

When authentic religious voices spoke up, they made a powerful distinction between faith leaders and Trump’s evangelical lackeys. The latter have made fools of themselves in venerating the most un-Christian president we have ever had, one who embodies none of the values of the great faith movements. The Jerry Falwell Jr.’s are cultural and partisan warriors who provide cover for the racism, cruelty, narcissism, materialism and dishonesty that define Trump’s character. These figures are not beacons of religious values.

To all the faith leaders who spoke out this past week, who summoned us to love our fellow man and who reminded Americans that a president who uses violence to conduct a photo op at a church debases both the presidency and religion, we can say, well done.