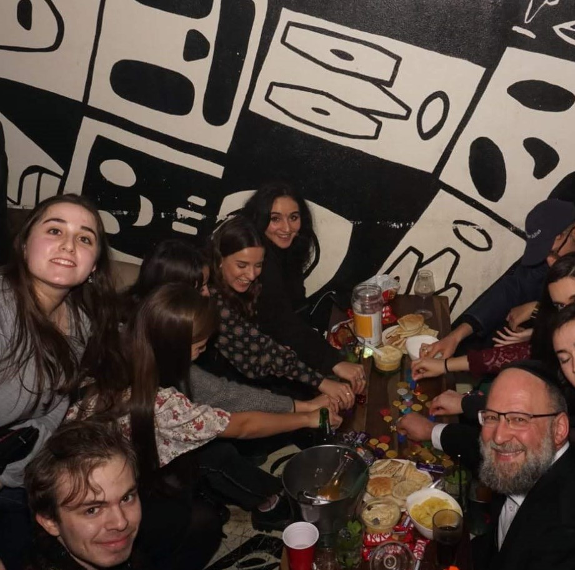 Alexandra Hassan,  President of UAL Jewish Society (aka J-Soc), tells us something about the festival, and what it means to her:

Chanukah is the Jewish eight-day ‘festival of lights’ that celebrates the rededication of the Temple after it was destroyed by the Greeks in second century BCE. The Jews were forced to follow the Greek way of life and not Judaism so a small army of Jews, called the Maccabees, fought the Greeks and won; this is one of the miracles of Chanukah.

Another miracle was that even though the Temple was destroyed and they thought they couldn’t find oil to light the menorah — the seven-branched candelabrum — they miraculously found a bit of oil but it was only enough to last one day, and it lasted for eight days!

What are your family traditions for the holiday?

For the eight nights of the festival, I join my family in lighting the menorah and say the blessings and festive songs to reminisce on what the festival represents.

Some families give money to their children as a present, who then choose which charity to give it to, but in my family, we give each other small, sentimental gifts. The festive food I eat with my family includes chocolate coins and fried food such as latkes (a bit like a hash brown) and doughnuts, which are eaten because the oil represents how the menorah was traditionally lit in the Temple.

Why is Hanukkah important to you?

The menorah once lit, lights up the dark winter and is a reminder of the importance of honouring my Jewish identity and heritage. How even in the darkest of times, even in the Holocaust, a light could be found through belief. For example, there is a story of how a concentration camp inmate saved up scraps of fat from their food and used loose threads to form makeshift wicks to kindle a flame to celebrate Chanukah and connect to Judaism.

Do you think there are any important themes from Hanukkah that non-Jewish people can bring into their lives?

The late Lord Rabbi Jonathan Sacks, the Chief Rabbi in the UK between 1991 and 2003, talked about how ‘Religious Freedom Matters’ (2010) for all faiths and beliefs which are still persecuted nowadays for they way they choose to worship. The symbolism of a candle is shared by many faiths and people, including Christians at Christmas, and Hindus & Sikhs at Diwali; it is a reminder of how hope and the strength of the human spirit can bring light into difficult situations. Whenever a candle is lit, whatever the faith or the beliefs of the person, the world becomes a little brighter and the diversity can enrich all our lives.

Do you have a favourite piece of Hanukkah-related art or poetry that you could share with us?

A childhood song I grew up singing is ‘I Have a Little Dreidel’ written by Samuel Grossman, in 1927 (a dreidel is like a spinning top)

Last year the UAL Jewish Society had a Chanukah party in a club in Shoreditch — it was a great night, we even managed to play a game of dreidel in the club!